I was very fortunate to attend Scala Days 2015 in San Francisco this week. It was incredible to talk to the people behind the language, and to get a glimpse of a wide ecosystem. I wanted to post a short recap of some of my thoughts and feelings after the conference. 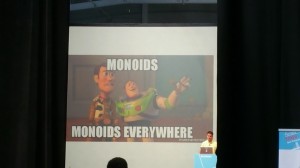 Martin Odersky delivered the first keynote on Monday, and described how Scala is evolving – specific changes to the language, solution to binary compatibility problem (intermediate TASTY format), and more. What he clearly conveyed, both through jokes and detailed plans, is that Scala is a unique language, with its own rules and limitations. It is not, and will not become “Hascalator”, despite many in the community demonstrating the benefits of a more strict functional language. At the same time, the language keeps evolving, while becoming more stable for dependable use. This process was further detailed by Grzegorz Kossakowski, who explained how the scala build process works, and how features get implemented into the language.

Bill Venners told a very interesting history lesson on some failed projects, and showed how he decided against including a feature into Scalatest because of API complexity it would create, as well as compile speed issues. Reframing the problem differently allowed for the creation of the SuperSafe compiler plugin, enabling the feature without performance or complexity cost. 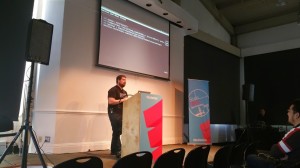 Josh Suereth and Eugene Yokota covered a history of build tools and lead up to SBT 1.0. It was great to hear of the influencers on SBT, starting from Make, and ending with Google Blaze. It’s very interesting how SBT server changes the build process, and it will be interesting to see what functionality it enables.

A theme I found extremely interesting, was the use of sun.misc.Unsafe with Scala to manage off-heap memory. Using unsafe allows to bypass JVM garbage collection, and manage the chunk of memory directly, accepting the challenge and danger that it brings. Denys Shabalin covered a library that wraps Unsafe and give a Scala specific access API for memory, which he open sourced during his presentation. Meanwhile Ryan LeCompte covered a specific usecase that benefited from utilizing off-heap storage for fast analytical query processing using Akka Cluster. Similar ideas were echoed by Lee Mighdoll while covering Sparkle, and how it maintains asynchronous arrays of batches of records flowing to keep the visualizer responsive.

All sessions will be posted on parleys.com soon, but I hope my short post has captured some of the atmosphere of the conference that can’t be conveyed in sessions alone. It will be interesting to watch the ideas presented evolve. 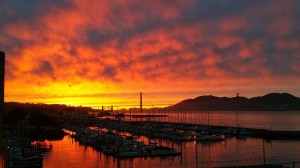