From what I’ve seen, vast majority of bugs and crashes programmers face on Android are around state and concurrency. These issues cause serious headaches not only in mobile applications, but they have a special flavor in Android. Specifically, all long running operations (network calls, file access, etc) must be done off the main (UI) thread. Once taken off the main thread, one needs to set up communication between UI and background threads to signal operation progress and communicate results. This is further complicated by device state changes of the application outside the programmer control. As an example, a rotation triggers a rebuild of the Activity, so if there were a thread running in the background, its launcher UI may no longer be there. Incorrect handling can be a cause of memory leaks or crashes.

Recent additions to Android, for example Fragments and Loaders, attempt to resolve some of these issues, but either fall short or bring their own problems. Just as an example, my original plan for this demo app was to use a Loader, but because I wanted to keep track of the download progress I had to fall back to using traditional threads.

This blog series will attempt to demonstrate some alternative ways of setting up asynchronous communication between Android components. The example application is a simple download helper. It accepts the URL of the file to download, and shows a progress bar. Download can be paused, resumed, or reset (to demonstrate two way communication). Complete source code can be found on github. Feel free to clone it, and run in Android Studio. 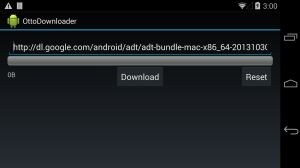 To be clear, this is not a tutorial on how to create a download application! If that’s your task, I would look at Services with an AsyncTask for the actual download (reminder: Service, although running in the background, still runs in the UI thread, that you never block!) Instead I’ll concentrate on the message passing aspect of an Android application.

In the first part I will use a message bus to handle all communication. For that we’ll make use of a Square library Otto. To be fair, the example takes it to an extreme in order to push all communication to be event driven and as asynchronous as possible, including handling touch events on the button. Otto bus really excels at communication between different view components, where an alternative would be either view traversal (tedious, and tough to evolve), or callback interface implementation (safe, but verbose). One example is communicating between different fragments, where an action in one should trigger a change in another. For this application Otto is not the best fit (its actually synchronous), but still a good introduction to the concept of an event driven application.

Let’s walk through the demo application:

DownloadActivity: Contains both the main Activity and the Fragment. The Activity is used only as a container for the Fragment, majority of the work is handled by the Fragment.

There are also a few classes in the events package, but they’re relatively straightforward.

Let’s start with the Downloader – it takes a URL to download, and a callback interface.

It would be nice to generate events directly from here, but doing so fails with an Otto exception due to attempts to access a bus pinned to the Android main thread (see more details below). The actual code to perform download is very standard for Java – we create a bogus file in /sdcard, and copy bytes from the InputStream into the FileOutputStream.

On each iteration we call a progress callback with the number of bytes we have downloaded and total bytes for the file.

DownloaderFragment takes care of the view. In the onCreate method it registers itself to the Bus.

Methods annotated with @Subscribe annotation then receive the corresponding events. All buttons are configured to post events to the bus upon a click – center button changes behavior depending on the download state, and the OnClickListener gets swapped out accordingly.

The answerDownloadStart kicks off the download by instantiating a new download thread and starting it. Besides the URL, it provides a callback class that posts appropriate events to the Bus from the thread.

Note: It is possible to initialize the bus with new Bus(ThreadEnforcer.ANY). This would allow events to be posted from any thread. But they would be consumed on the same thread, so any attempts to update the views would result in a runtime exception (they can only be modified by the UI thread). Hence, the default way to instantiate an Otto bus is the safest.

We also take precaution to check the activity not to be null prior to posting Runnables to run on UI thread. If a device is rotated, the original Activity is no longer there – in fact, there may be a period when the Fragment is in a detached state, and the attempt to call its Activity would fail with a NullPointerException.

If you run the app on your device, you may hit some performance issues – the interface may lag. Otto bus doesn’t allow dropping of events, and every one is processed. In addition, garbage collection is triggered often, as every progress report is a new object. Finally, all the view updates all taking place on the UI thread. We will see some ways to control the message flow in the next installment.

In the next installment we’ll take a look at RxJava, and how it can be used to drive the same app.

Let’s say you want to make a static list view, perhaps because all the items in the list fit on the screen (no matter how small). Android doesn’t offer an easy way to accomplish this with something like myListView.setEnableScrolling(false); There is a StackOverflow question that provides an easy way to do it using a custom view, as well as a few other options that work by preventing the move motion event from reaching the ListView. That works well, but if you touch one of the items in the list, and move your finger away from the view, the event bound to that item view still fires. The behavior the user usually expects is to cancel the event in this case – think of touching a button, and changing your mind mid-press. That can be done using a slightly more complex dispatchTouchEvent method. The complete class is below:

Now replace your ListView in the layout by the custom implementation, and you have a properly functioning static ListView.

If you’ve ever used WebView in Android, you know that its a double edged sword. On the one hand being able to bring the full power of HTML and Javascript into a section of your application frees you up from vastly more complicated native coding that you would have to do to replicate something that can easily be done with standard web technologies. On the other hand, WebView typically uses the standard browser implementation on the device you’re using, which is typically tied to manufacturer’s updates, and therefore lags modern browsers, like Chrome, by a significant margin in terms of HTML5 feature support. Debugging rendering issues in a WebView is also painful to say the least.

To combat this problem, Google has promised “Chromium” implementation for the WebView – essentially using the Chrome rendering engine to power WebView. This was first talked about at Google IO 2012. Android 4.3 shipped yesterday, and WebViewFactory shows experimental support for Chromium. However, the crucial webviewchromium.jar is still missing from the /system/framework directory to enable this support.

So for now, we’re still left where we were. One can only hope for the next release to finally have this working out of the box.

You may have needed to see all commmunication for your app to the server. Perhaps you’ve inherited the codebase from someone else, or it relies on a library and you want to see how the server requests look. Or you’re just curious to see why your device is accessing the network, and if a questionable app is sending some private information without your consent. The easiest way I found is to use mitmproxy, a python man-in-the-middle proxy, which logs all requests. Here is a step by step guide to get it working in Android.

1. Make sure you have your Python environment setup. The exact details differ depending on what OS you’re using. Make sure to install pip as well.

2. Install mitmproxy. If you have installed pip in the previous step, this should be as simple as running:

3. Run mitmproxy. I had to provide a different port number than the default, because that one was used by apache I have running locally.

4. Take a note of your computer’s local IP

5. Make sure your Android device is connected to the same network as your computer running mitmproxy. Go into Settings -> Wi-Fi and long press the currently selected network. 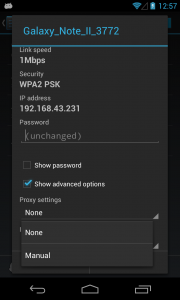 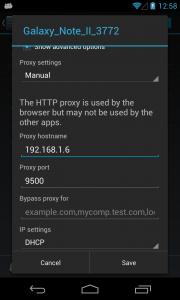 8. You will now see requests listed in the mitmproxy window as they are generated by the device. You can navigate to the request you want to examine using arrow keys, and view more details, such as full request headers and response from the server. The mitmproxy script has a lot more options that you can explore as you need them – for example, you can inject an SSL certificate into the device to capture SSL requests. Check out the mitmproxy documentation for more information.

I’m giving a presentation on Apache Pig at DataPhilly. For those who want to access the slides later, or those who were not able to make it in person, below is the presentation I’m using to keep my talk on track.